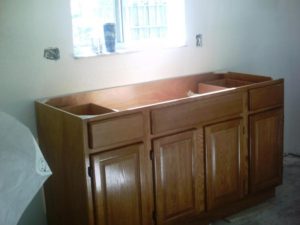 Kitchen remodeling is an expensive proposition, so it can be tempting to cut corners and save money any way you can! But when it comes to particle board vs. plywood and/or solid wood, does the slightly lower cost of particle board cabinetry really save you money? First let’s take a look at the three common types of wood used for construction in cabinetry.

Particle board is composed of wood particles (read: sawdust) that are combined with glue and resin in a high-pressure mold, to create … well, let’s just call it a “wood-like substance,” shall we?

Solid wood is exactly what it sounds like: someone cut down a tree, and sawed it into lumber, which was then used to build cabinets. Or, much more commonly, it’s used to build door panels and accents for cabinets.

Why? Well, because first off, solid wood is the most expensive option. For cabinet frames and other parts that are rarely, if ever, going to be seen by anybody, it’s simply a waste of money. For doors, especially more complex designs, however, it can be far superior to particle board or plywood.

There’s another reason, aside from cost, that solid wood is rarely used for the body and sides of cabinets: susceptibility to warping. Solid wood warps over time. It just does. Various types of treatment can limit this, as can using wood that’s much thicker than is otherwise needed, such as is often done in furniture, but eventually, given enough time and variations in moisture and temperature, wood just warps. For cabinets that often hold hundreds of pounds of expensive and fragile objects—that’s bad!

Plywood is formed by cutting wood into very thin, flat layers. These layers are then glued together so that the grain of the wood criss-crosses. While this may not be quite as pretty as solid wood, or as cheap as particle board, it has certain advantages over both.

At RTA Cabinet Store, most of our lines of kitchen cabinetry use some combination of plywood frames, and solid wood drawer boxes, rails, and doors. Not only does this save you money compared to entirely solid wood construction, it’s superior to it as well, in many ways.

While it’s possible you could save a little money by sourcing particle board cabinetry, the higher possibility of stripping screws and damaging them during assembly and installation might end up costing you more, even in the short-term; and in the long-run, there’s simply no comparison. Particle board will cost you, in terms of longevity, frustration, and perhaps most importantly, perceived quality, should the time ever come to sell your home.