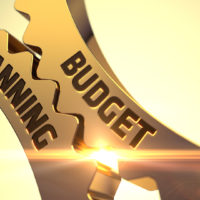 Be Realistic About What You Need

Quality is important; you don’t want to sacrifice that. But when it comes to appliances and fixtures, price and quality aren’t always directly linked as much as you might think. You can go a long way by using consumer review sites and reading customer reviews and testimonials, but one of the best ways to save money is by being realistic about what you truly need in a kitchen.

For example, that $12,000 six-burner, dual-oven professional stove can be awfully tempting. But do you really need it? If you cook a lot of feasts, inviting over tons of extended family or friends on a regular basis, or you plan to record an instructional cooking series on YouTube, then maybe. If you’re just cooking for yourself and your family, a nice four-burner range with some cheffy features is probably enough, and could save you thousands, and give you extra storage space as well, since they’re smaller.

Don’t Overlook the Value of Space

Many of the houses that are just coming up for their first kitchen remodels now, were built at a time when kitchen islands were all the rage. They’re still popular, but no longer mandatory, and some kitchens that were realistically too small to make effective use of an island can be improved by getting rid of it and opening up more space. Kitchens have become more social areas in the last decade or two, with families cooking together. This means you do need enough counter space to set up several work areas, but you also need room to maneuver around each other. Do you really need a full island with its own plumbing? Or would a butcher’s block island that you can move over against the far wall when it’s not in use be enough?

Don’t Pay to Ship a Bunch of Air

Recent studies, including hundreds of customer testimonials and reviews, have shown that the difference in quality between RTA kitchen cabinets, and their pre-assembled counterparts are negligible, or often even favor the ready-to-assemble option! How is this possible, when they’re so much cheaper!?

Well, consider that when you buy pre-assembled cabinets, you’re paying someone else to assemble them. Even worse, you’re paying a shipping company to ship a bunch of air inside the cabinets. Worse still, cabinets are very sturdy to the kinds of stresses they experience actually installed in a kitchen, but not so much when it comes to the stresses placed on them by the movement of trucks and ships. Often times, we find that pre-assembled cabinets suffer from invisible damage in shipping that doesn’t manifest until years later as wear and tear begins to set in. So not only are you paying for someone else to do something you’re perfectly capable of doing on your own, and then paying someone to ship a bunch of air, you’re paying them to distress and possibly damage your cabinets in the process!

Save money. Order RTA Kitchen Cabinets. They’re high-quality, they’re modern, and we have dozens of designs ready to go and in stock. Check them out here!